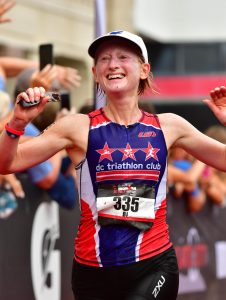 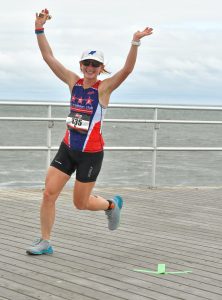 Several years ago, I had a running injury and was only allowed to swim, so I really focused on that for a couple months. After all the effort, I decided I should try a triathlon

I’m a terrible swimmer. In the Atlantic City 70.3, I was therefore terrified of the swim, and I basically waited until everyone else was in the water and the race volunteers were looking at me like, “if you’re going to do this race, you’re going to have to get into the water at some point.” The swim was fine, but by the time I got to the run, it was really hot and sunny, and I wished I’d not wasted all that cool morning weather just standing at the edge of the water.

Trail running! I also love to travel, so I’m always in search of destination races and, even if it’s just a work trip, I try to get out for a run in every place I visit. I think it’s the best way to see a new city or country.

How did you get into trail running?

I’d started asking a friend a lot of questions about trail running, and all my questions eventually led to an invitation to give it a try. We ran about 8 miles, and I was so proud when we finished that I posted pictures of my muddy shoes on Facebook.

Do you train differently for trail races?

Not really. I think it’s important to train on the surfaces you will race, so I seek out hills or rocks or whatever mimics the next event, but I think that’s true in road running too.

Where do you train?

We in DC are so lucky to have great trails literally right in our backyards, and I love Rock Creek Park and the Potomac Heritage Trail. It’s also just a short drive to the Bull Run, Seneca, and Patapsco trail networks, and even the trails in the Shenandoah and Massanutten mountains are only a couple hours away.

Any advice that you would recommend for a beginner?

The best advice I received was to stop focusing on my splits. Trails are slower, especially at first, and every mile is different. I still do traditional speedwork on the track or road, but on trails, focusing on form, running technique, effort level, and nutrition help my speed a lot more than staring at my watch ever did.

I just did the Stone Mill 50 Mile race which was my first at that distance. Someday, I’d like to shift my focus from running back to triathlon and train for a full Ironman. 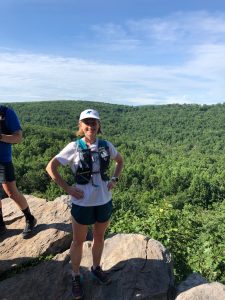 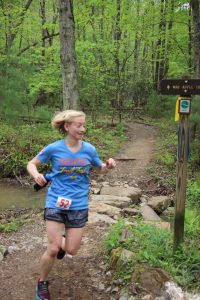 October, 2019
What made you decide to join NTP (the New Triathlete Program)? A friend who did NTP last year recommended it. So I decided, why not. Did you have any ...

August, 2019
How did you get involved in triathlon? I started racing triathlons back in 2012 because I wanted really to learn how to swim. I was cycling regularly ...

January, 2019
I’ve been enjoying triathlons on and off for the last 30 years, having been recruited by an old boyfriend to try Mrs. T’s Pierogies’ Chicago Tri...

By checking the box below, you agree, warrant and covenant as follows: I acknowledge that a triathlon or multisport event or training can be an extreme test of a person's physical and mental limits and carries with it the potential for death, serious injury, and property loss. I HEREBY ASSUME THE RISKS OF PARTICIPATING IN ALL DC TRIATHLON CLUB FUNCTIONS, including training, educational and social events (collectively, "Events"). I certify that I am physically fit, have sufficiently trained for participation in DC Triathlon Club Events and have not been advised otherwise by a qualified medical person. I acknowledge that my statements are being accepted by the DC Triathlon Club and are being relied on by the DC Triathlon Club Organizers and the administrators in permitting me to participate in any organized Club Event. In consideration for allowing me to become a Club Member in the DC Triathlon Club and allowing me to participate in Club Events, I hereby take the following action for myself, my executors, administrators, heirs, next of kin, successors and assigns: a) I AGREE to abide by the Competitive Rules adopted by USA Triathlon, including the Medical Control Rules, as they may be amended from time to time, and I acknowledge that my Club membership may be revoked or suspended for violation of the Competitive Rules; b) I AGREE to abide by DC Triathlon Club rules and code of conduct, as they may be modified at any time and at DC Triathlon Club's sole discretion, and by the rules established for any DC Triathlon Club Event; c) I WAIVE, RELEASE, AND DISCHARGE, from any and all claims or liabilities for death, personal injury, property damage, theft or damages of any kind, which arise out of or relate to my participation in, or my traveling to and from an organized Club Event, THE FOLLOWING PERSONS OR ENTITIES: DC Triathlon Club, Club Sponsors, DC Triathlon Club volunteers, all states, cities, countries or localities in which Club functions or segments of Club functions and held, and the officers, directors, employees, representatives, and agents of any of the above; d) I AGREE NOT TO SUE any of the persons or entities mentioned above for any of the claims or liabilities that I have waived, released or discharged herein; and e) I INDEMINIFY AND HOLD HARMLESS the persons or entities mentioned above from any claims made or liabilities assessed against them as a result of my actions during an organized Club function. I HEREBY AFFIRM THAT I AM EIGHTEEN (18) YEARS OF AGE OR OLDER, I HAVE READ THIS DOCUMENT, AND I UNDERSTAND ITS CONTENTS. If the applicant is under eighteen (18) years of age, their parent/guardian must sign this annual waiver and release form and an additional release available from the Club.
249 queries in 3.082 seconds.