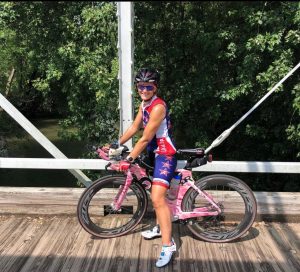 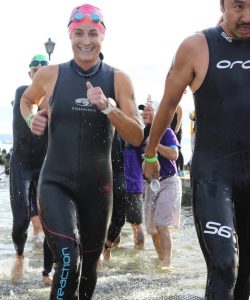 After I lost about 70 of 100lbs, I met a fellow DC Tri Club member, Jeff Halper, at a neighborhood back to school party. He had written a race report about the Philly Tri and I was just so curious about it. He happened to be just as curious about running a marathon which I was training for. We talked and shared our experience both vowing never to do the other. Just so happened that at the Philly Tri that year, someone had died. It totally freaked me out!

After my marathon, Halper checked back in to see how I did and offered any help if I did decide to do a triathlon. A few months later, I decided to get a bike, and Halper guided me through the process and got me set up with some local rides. The rest is history!

The first triathlon I did was the Sprint at Rumpus in Bumpass in 2011. The water was so cold! I wanted to quit at 200m in as no one told me about the freak out. I knew Halper would make fun of me if I didn’t finish, so I did a lot of breast strokes. The bike course was pretty uneventful and I was so thankful to get to the run, my comfort zone! I finished with a smile. With my swim time over :30, I was mortified and determined to do more.

My most memorable race/experience was training for and competing in IM Lake Placid in 2013. The MoCo Mafia had a huge crew and we all we attempting this feat together. We spent so much time training together we really did become like a family. Racing together, experiencing the pain and thrills of race day is something I will never forget. Plus we were all in epic shape come race day. Two other IMs later, it never felt as good as the first one.

My biggest mistake was not getting my bike professionally fit for over a year. Turned out the LBS sold me inventory and not the bike that was the right fit. It was a 54 (I currently ride a 48) and I just thought it was normal to have pain in that area… that peeing after cycling was supposed to hurt! My advice: do it immediately!

I am an elementary school teacher at an IB World School in Moco. I recently jumped from Kindergarten to 5th grade. Boy what a change. I coach a run club for 2-5th graders to spread my love of running!

What is your favorite pair of shoes?

I need a stability shoe and the Adrenaline have always been a right fit for me. I dream of being sponsored so I can rep the company and score free products. Almost convinced them through humor that as a middle of the pack runner, I spend more time on the course, around more people so they would get more bang for their buck. Nothing has come of it… yet!

Have your children also gotten the triathlon bug?

Both of my children got into running and initially into to triathlons. We have a local one for kids in MoCo. They swam in the pool, rode around the park’s paved path on their extremely heavy, yet inexpensive bikes, and ran in the parking lot of Bohrer Park in Gaithersburg, MD. They both did very well and were quite excited to compete. I think if I had encouraged it more, they would have continued but having one triathlete in the family was expensive enough. I cannot even imagine couples who race! Ouch!

I really like to draw and do bullet journaling. I find peace and solitude in sketching and lettering. Using a bullet journal became my outlet in a functionally way. Bujo is like a cult and it’s so addicting to see other’s creations. It’s also perfect for this type A personality!

March, 2019
Kelly Lefler 1) What do you think about when you’re swimming so many yards? Math! Most often counting lengths of an interval and converting it to f...

June, 2018
Pat grew up playing baseball and football then began dabbling in endurance sports as a college junior. After his first (and only) stand alone marathon...

September, 2019
How did you get involved in triathlons? I was a long distance swimmer in HS and College and started running in college as well. People always said I s...

By checking the box below, you agree, warrant and covenant as follows: I acknowledge that a triathlon or multisport event or training can be an extreme test of a person's physical and mental limits and carries with it the potential for death, serious injury, and property loss. I HEREBY ASSUME THE RISKS OF PARTICIPATING IN ALL DC TRIATHLON CLUB FUNCTIONS, including training, educational and social events (collectively, "Events"). I certify that I am physically fit, have sufficiently trained for participation in DC Triathlon Club Events and have not been advised otherwise by a qualified medical person. I acknowledge that my statements are being accepted by the DC Triathlon Club and are being relied on by the DC Triathlon Club Organizers and the administrators in permitting me to participate in any organized Club Event. In consideration for allowing me to become a Club Member in the DC Triathlon Club and allowing me to participate in Club Events, I hereby take the following action for myself, my executors, administrators, heirs, next of kin, successors and assigns: a) I AGREE to abide by the Competitive Rules adopted by USA Triathlon, including the Medical Control Rules, as they may be amended from time to time, and I acknowledge that my Club membership may be revoked or suspended for violation of the Competitive Rules; b) I AGREE to abide by DC Triathlon Club rules and code of conduct, as they may be modified at any time and at DC Triathlon Club's sole discretion, and by the rules established for any DC Triathlon Club Event; c) I WAIVE, RELEASE, AND DISCHARGE, from any and all claims or liabilities for death, personal injury, property damage, theft or damages of any kind, which arise out of or relate to my participation in, or my traveling to and from an organized Club Event, THE FOLLOWING PERSONS OR ENTITIES: DC Triathlon Club, Club Sponsors, DC Triathlon Club volunteers, all states, cities, countries or localities in which Club functions or segments of Club functions and held, and the officers, directors, employees, representatives, and agents of any of the above; d) I AGREE NOT TO SUE any of the persons or entities mentioned above for any of the claims or liabilities that I have waived, released or discharged herein; and e) I INDEMINIFY AND HOLD HARMLESS the persons or entities mentioned above from any claims made or liabilities assessed against them as a result of my actions during an organized Club function. I HEREBY AFFIRM THAT I AM EIGHTEEN (18) YEARS OF AGE OR OLDER, I HAVE READ THIS DOCUMENT, AND I UNDERSTAND ITS CONTENTS. If the applicant is under eighteen (18) years of age, their parent/guardian must sign this annual waiver and release form and an additional release available from the Club.
237 queries in 1.464 seconds.