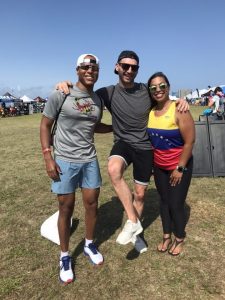 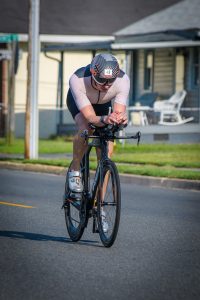 I did a triathlon relay with classmates during grad school. I did the swim leg. Our team’s results were nothing to write home about, but I had fun and got a taste of that sweet, sweet triathlon culture. A couple years later I moved to DC, selling my car in the process. Capital Bikeshare became my primary means of transportation, and I began to realize that biking was pretty fun. I eventually bought a bike and signed up for the club’s New Triathlete Program.

I was in the 2018 NTP class, and our goal race was Rev3 Williamsburg. A month before the race I injured my IT band while running. I went on a largely run-free diet that month. I had a great swim, burnt most of my matches on the bike, and ran-walked the run. Besides making many training and race mistakes, I had a great time and was hungry for more.

I’ve made a lot of race mistakes in my short tenure, but the most memorable was at Rumpus in Bumpass earlier this year. I had a great swim and wanted to make good time through T1. After stripping off my wetsuit, putting on my bike gear, and grabbing my bike, I sprinted toward the mount line. I was moving too fast for the congested, narrow path, so I ended up tripping and falling on top of my bike. My bike was damaged, as was my ego. But not all was bad. The bike was still rideable, and the people were entertained.

Do you have a swimming background?

I thought you’d never ask! Yes, I have a swim background. I started competitive swimming when I was 9 and then picked up water polo in high school. I had a short stint on my college’s NCAA water polo team but eventually moved over to my college’s club team.

What is your favorite stroke?

Freestyle. My favorite event was the 200 free.

Do you find triathlon swimming different?

The stroke and fitness are largely the same. But there are some big differences. For one, you must think a lot more during a triathlon swim than you do during a competitive swim race. You must pay attention to the buoys, to the current, and to swimmers around you. You must make decisions like whether to draft off a swimmer, forge on ahead by yourself, or cool your jets and conserve energy for the rest of the race. Another key difference is the mentality. In competitive swimming, races last seconds or minutes, not hours. So you have to worry about every fraction of a second lost to a bad dive, stroke, or turn. In triathlon, you typically only have to worry about tens of seconds or minutes. From this perspective, triathlon swimming is a lot less stressful than competitive swimming.

Do you have any swim advice for triathletes?

I’ve got a few thoughts:

Have confidence in yourself. A key part of fast, efficient swimming is being relaxed in the water. If you are not confident, your body becomes rigid and you have to fight for each stroke. Swimming is not about fighting. If you’re comfortable and confident during a normal pool swim but get a lot of anxiety about open water swimming, try simulating that open water sensation. I suggest start your swims by jumping (yes jumping, not sitting and sliding) into the deep end of the pool, pulling yourself to the surface quickly, and swimming. You might also want to recruit a friend to swim next to you and push you around a bit so you get used to pack swimming. Remember, swim with confidence.

Have patience. Swimming is a difficult thing to master, and you do not become a fast swimmer overnight. Sometimes you will feel that you haven’t seen improvements in days or weeks or months, but don’t let that get to you. If you put in the work, you will eventually get faster.

Work hard, but also work smart. Swimming is not just about expanding your aerobic and anaerobic limits. Swimming involves a lot of technique, so you should constantly be working to improve yours. Sometimes you will be able to achieve major improvements, and sometimes just minor ones, but they all make a difference.

I just competed in my first half ironman at Ironman Atlantic City 70.3. The weekend was fantastic because I got to hang out with and cheer for some awesome triathlon friends (shout out to Mike Shipp, Daniela Diaz, and all the people I met from District Triathlon). I also got to meet and race against Triathlon Taren, who has been a huge part of my triathlon onboarding. The highlight of the weekend was finishing fifth in my age group and snagging a spot to Ironman 70.3 World Championships in Taupo, New Zealand. Let the LotR marathoning begin!

In 2015 I did a 2-mile Alcatraz swim. The water temperature was 58 degrees. I only wore a speedo. #Type2fun

February, 2020
How did you get involved in triathlons? After I lost about 70 of 100lbs, I met a fellow DC Tri Club member, Jeff Halper, at a neighborhood back to sch...

March, 2019
Connor Williams   What’s something you just can’t live without? coffee! If you had a CD stuck in your CD player, what artist would it be? Bo...

By checking the box below, you agree, warrant and covenant as follows: I acknowledge that a triathlon or multisport event or training can be an extreme test of a person's physical and mental limits and carries with it the potential for death, serious injury, and property loss. I HEREBY ASSUME THE RISKS OF PARTICIPATING IN ALL DC TRIATHLON CLUB FUNCTIONS, including training, educational and social events (collectively, "Events"). I certify that I am physically fit, have sufficiently trained for participation in DC Triathlon Club Events and have not been advised otherwise by a qualified medical person. I acknowledge that my statements are being accepted by the DC Triathlon Club and are being relied on by the DC Triathlon Club Organizers and the administrators in permitting me to participate in any organized Club Event. In consideration for allowing me to become a Club Member in the DC Triathlon Club and allowing me to participate in Club Events, I hereby take the following action for myself, my executors, administrators, heirs, next of kin, successors and assigns: a) I AGREE to abide by the Competitive Rules adopted by USA Triathlon, including the Medical Control Rules, as they may be amended from time to time, and I acknowledge that my Club membership may be revoked or suspended for violation of the Competitive Rules; b) I AGREE to abide by DC Triathlon Club rules and code of conduct, as they may be modified at any time and at DC Triathlon Club's sole discretion, and by the rules established for any DC Triathlon Club Event; c) I WAIVE, RELEASE, AND DISCHARGE, from any and all claims or liabilities for death, personal injury, property damage, theft or damages of any kind, which arise out of or relate to my participation in, or my traveling to and from an organized Club Event, THE FOLLOWING PERSONS OR ENTITIES: DC Triathlon Club, Club Sponsors, DC Triathlon Club volunteers, all states, cities, countries or localities in which Club functions or segments of Club functions and held, and the officers, directors, employees, representatives, and agents of any of the above; d) I AGREE NOT TO SUE any of the persons or entities mentioned above for any of the claims or liabilities that I have waived, released or discharged herein; and e) I INDEMINIFY AND HOLD HARMLESS the persons or entities mentioned above from any claims made or liabilities assessed against them as a result of my actions during an organized Club function. I HEREBY AFFIRM THAT I AM EIGHTEEN (18) YEARS OF AGE OR OLDER, I HAVE READ THIS DOCUMENT, AND I UNDERSTAND ITS CONTENTS. If the applicant is under eighteen (18) years of age, their parent/guardian must sign this annual waiver and release form and an additional release available from the Club.
238 queries in 2.833 seconds.