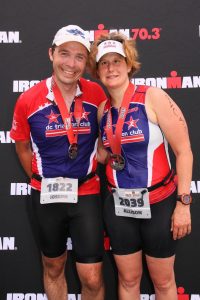 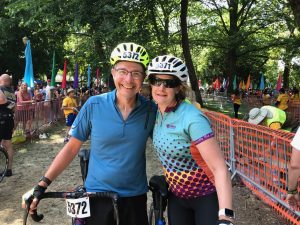 Joe: I used to work with Dena Richardson, who was a member of the club, and biked on her Fall Colors Ride from Pittsburgh to DC in 2012. There were several members of the club on the trip and they seemed fun. I was running and biking already, and used to be a lifeguard so it seemed a natural fit.

Ali: I was training for the NYC Marathon in 2011 and a woman at work talked me into doing the 2013 Kinetic Half as a relay. She was keen to do the bike, but didn’t want to do the swim or the run. I was a lifelong swimmer and runner, but had grown tired of the huge running races. Kinetic was so much fun and after that, I was hooked.

Ali: Kinetic Half in 2012 as a relay. Then I joined the New Triathlete Program in 2013 and did Peasantman and Naylor’s Beach.

Joe: Assuming that I could just double my Half Ironman nutrition and complete a Full. Eight Clif Bars wasn’t possible and without the course food, I would have been in real trouble.

Ali: Not writing my name on the inside of my wetsuit. With the discount through DC Tri, everyone has the Xterra wetsuit! At Peasantman 2014, I ended up with Joyce Jones’ and she with mine. Except she left after the open water swim clinic on Saturday and I didn’t realize until I was trying to stuff myself into a size M the next morning. I had to have three people strip it off. It wasn’t pretty. Get a Sharpie and write your name and phone number in your wetsuit!

What’s it like being a triathlon couple? Do you plan to do the same races or that one of you is the Sherpa?

Joe: We tend to limit our races to 2-3 per year, though we’ve taken a break since 2017. We do the same races so we can link our training schedule. We are pretty much the same speed for biking and running, which makes training easier, though Ali is a much faster swimmer. We have a different approach to training though. I am pretty relaxed about actual time and distance. Ali is more literal – if it says 2 hours and 15 minutes, you can believe we won’t be out there for 2:10 or 2:20. And she’ll force us to do the brick. My paddling races do interfere a bit. I paddle on the Washington Canoe Club outrigger team and we have organized practices three times a week, including Saturday mornings.

Ali: We do the same races, though I balk at doing a full Ironman. I did sherpa for Joe at Placid in 2014, which meant hanging out at the Lake Placid Brewery for a good amount of the day. Because we’re the same speed and we’re just out there to have fun, it means we can train together. We ran the NYC Marathon together in 2015, Raleigh 70.3, many of the Kinetic Multisport races, two Ragnars, and a bunch of others.

Joe: Many! The lightning at Lake Placid (2014) and thinking that I would have called the swim earlier (they did, but after I finished) and the descent into Keans in the absolute pouring rain. Doing the whole run at Musselman together, and most of it in Raleigh.

You both like to travel. Have you done any race vacations?

Joe: We have done one race vacation, or rather we had a race on one vacation, but running to make the gear easier. That was also a mistake as it was about a week after Raleigh and we hurt! In general our vacations tend to be active though- our first trip together was a safari in Kenya and Tanzania, and then our honeymoon was a boat/bike trip in Croatia. Last year we combined the Seattle to Portland bike with a trip to see my family in Oregon. We both have a bit of a hard time sitting still, so these work pretty well for us.

Ali: We did the Grand Teton Half Marathon in 2015, which was mid-way through a two week trip of National Parks out west. I can’t say enough good things about Vacation Races – they do a great job and the scenery is beautiful. We completed the Seattle to Portland ride last summer with five friends we met through DCTri. It was a beautiful ride and very well supported. For part of our honeymoon in Croatia, we biked six of the islands, which is a great way to see the scenery. We booked a bike trip in Japan earlier this year, but for obvious reasons, had to postpone. While it seems like a lot, we don’t ship our bikes. All of the destination rides have a rental option and they’ve all been great.

You also row, Joe. How did you get into it and does it help with cross training?

Joe: First- paddling not rowing! (It’s a thing.) I guided canoe trips in high school and college so have pretty much always been a paddler, though more as wilderness transportation rather than racing, and then found the Washington Canoe Club when I bought a used kayak and needed a place to store it. Once there I joined the mens outrigger team as I figured I was pretty fit and could paddle- turns out I was relatively wrong on both counts, but I stuck with it, and now coach the novice team and have steered the boat in the ocean through four foot waves. I think it helps with the swimming and mental toughness parts of the sport, but the time makes other training hard. Getting off the water after a three hour hard paddling practice and heading for a long ride doesn’t happen as much as it should.

Ali: Socially biking and swimming (aka the combination of exercise and food with friends), gardening, and traveling. And eating what Joe cooks!

January, 2019
Sophia first tried her hand at triathlon in 2016 by committing to SavageMan’s Sprint in Deep Creek Lake, MD.  With next to zero relevant athletic e...

July, 2020
How did you get into SwimRun? I love swimming and used to do a lot of trail running when I lived in upstate NY. SwimRun gave me a great opportunity to...

March, 2013
“The Training Diaries” is a monthly series of posts by Lindsey Jerdonek, a DC Tri Club member, and third-year professional triathlete. In ...

By checking the box below, you agree, warrant and covenant as follows: I acknowledge that a triathlon or multisport event or training can be an extreme test of a person's physical and mental limits and carries with it the potential for death, serious injury, and property loss. I HEREBY ASSUME THE RISKS OF PARTICIPATING IN ALL DC TRIATHLON CLUB FUNCTIONS, including training, educational and social events (collectively, "Events"). I certify that I am physically fit, have sufficiently trained for participation in DC Triathlon Club Events and have not been advised otherwise by a qualified medical person. I acknowledge that my statements are being accepted by the DC Triathlon Club and are being relied on by the DC Triathlon Club Organizers and the administrators in permitting me to participate in any organized Club Event. In consideration for allowing me to become a Club Member in the DC Triathlon Club and allowing me to participate in Club Events, I hereby take the following action for myself, my executors, administrators, heirs, next of kin, successors and assigns: a) I AGREE to abide by the Competitive Rules adopted by USA Triathlon, including the Medical Control Rules, as they may be amended from time to time, and I acknowledge that my Club membership may be revoked or suspended for violation of the Competitive Rules; b) I AGREE to abide by DC Triathlon Club rules and code of conduct, as they may be modified at any time and at DC Triathlon Club's sole discretion, and by the rules established for any DC Triathlon Club Event; c) I WAIVE, RELEASE, AND DISCHARGE, from any and all claims or liabilities for death, personal injury, property damage, theft or damages of any kind, which arise out of or relate to my participation in, or my traveling to and from an organized Club Event, THE FOLLOWING PERSONS OR ENTITIES: DC Triathlon Club, Club Sponsors, DC Triathlon Club volunteers, all states, cities, countries or localities in which Club functions or segments of Club functions and held, and the officers, directors, employees, representatives, and agents of any of the above; d) I AGREE NOT TO SUE any of the persons or entities mentioned above for any of the claims or liabilities that I have waived, released or discharged herein; and e) I INDEMINIFY AND HOLD HARMLESS the persons or entities mentioned above from any claims made or liabilities assessed against them as a result of my actions during an organized Club function. I HEREBY AFFIRM THAT I AM EIGHTEEN (18) YEARS OF AGE OR OLDER, I HAVE READ THIS DOCUMENT, AND I UNDERSTAND ITS CONTENTS. If the applicant is under eighteen (18) years of age, their parent/guardian must sign this annual waiver and release form and an additional release available from the Club.
238 queries in 2.648 seconds.