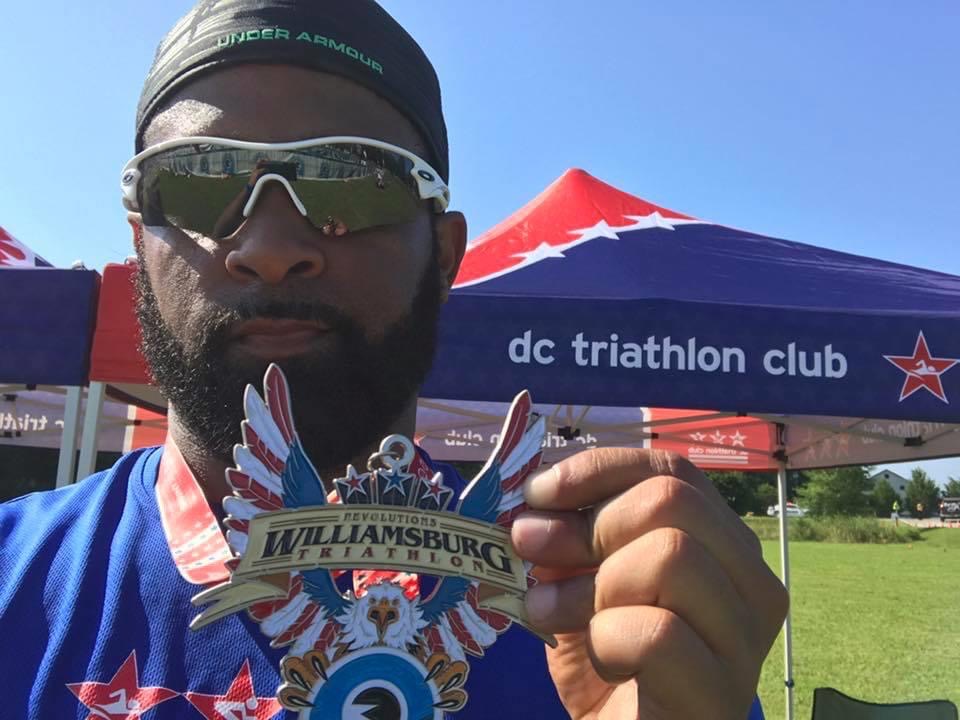 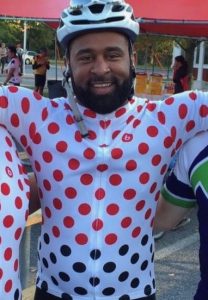 Honestly, I had never even heard of Triathlon until a few years ago. Funnily enough, I met a girl who was into endurance sports including triathlon. I thought I’d be able to win her over by getting into triathlon so I gave it a shot and ended up falling in love with the sport! I also found out the hard way that you can’t impress a triathlete with triathlon!

My very first race was a Sprint distance with Peasantman at Lake Anna, in VA. It was an incredible experience, and I signed up for my second race the very next day. Shout out to Tuan and crew! They really know how to make a newbie feel like a Fresh Prince!

Not joining a club sooner. My first year of triathlon, I did everything on my own. I actually learned to swim by watching YouTube videos. After my 3rd race and seeing tons of representation from the DC Tri Club, I joined and was so happy I did!

The Off Season Spin class helped me to make lots of friends in the group. I learned so much about how to be a better cyclist and manage my heart rate–which I had no idea was a thing until I joined the club. I can one hundred percent say that OSP made me a better triathlete.

As a person of color, are there any extra challenges in the sport?

I can say for certain that the DC Tri Club has been an incredibly welcoming group. I’ve made some life-long friends through the events, classes, and races for sure. When I first started, I thought people were going to laugh at me because I wasn’t a strong swimmer. I figured they’d see me and joke about the stereotype of black people not knowing how to swim. Boy was I wrong! I got nothing but encouragement from the Club, but I did use my internal fears as motivation to work hard on my swim technique, and I’m happy to say that swimming became my favorite discipline of triathlon despite having a previous background in running and cycling.

Triathlon is an amazing sport–it takes a lot of time and commitment, but the reward of accomplishment is well worth it. I wish that more people of color knew about it, but I suspect that many were like me. I’ve spent lots of time thinking about why more minorities don’t participate–especially because it wasn’t uncommon for me to be one of–if not–the only black person at an event or race. I don’t think people realize how unintentionally unwelcome this makes people of color feel. Especially when there are other groups within the TriClub that get their own recognition (which I love!). I think it would be pretty cool to see a Triathletes of Color group in the Club similar to NTP or TriOut.

I’m a really social person, so happy hours and get-togethers are always a win for me. I also low-key love watching Cage Fighting like UFC on the weekends, but I don’t talk about it much publicly because most people see it as too violent and not for the art that it is.

Well typically the fun fact that I tell people is that I’ve done 7 triathlons. This usually wows folks, but when you’re talking to fellow triathletes, that’s child’s play. All they want to know is when you’re going to do your first Ironman. I’m also a pretty darn good cook, and love to make delicious food for others, but I currently live by myself, so I don’t get to do that as often as I’d like. I also have a podcast called BlackLITE that specifically talks about what it’s like being Black in America today. If you’re interested, it can be found on Apple Podcasts, Spotify, and iHeart Radio. I’m probably a little biased, but I think everyone can learn something from it! 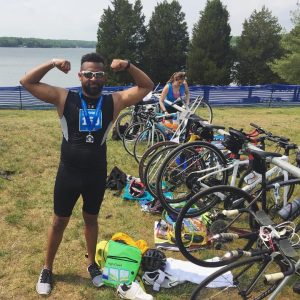 June, 2018
Liz comes from a competitive background of college Soccer, track running and swimming. After pursuing a graduate degree in Meteorology, Liz missed hav... 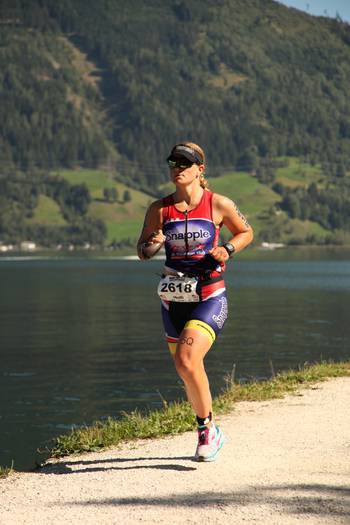 February, 2018
Holli Finneren What do you do for a day job? I’m an Outpatient Physical Therapist. If you were an animal what would you be? If I were an animal ...

June, 2018
Took up triathlon in 2013 after a couple years of collegiate rowing, and immediately fell in love with it. Coming from a running background, I spent m...

By checking the box below, you agree, warrant and covenant as follows: I acknowledge that a triathlon or multisport event or training can be an extreme test of a person's physical and mental limits and carries with it the potential for death, serious injury, and property loss. I HEREBY ASSUME THE RISKS OF PARTICIPATING IN ALL DC TRIATHLON CLUB FUNCTIONS, including training, educational and social events (collectively, "Events"). I certify that I am physically fit, have sufficiently trained for participation in DC Triathlon Club Events and have not been advised otherwise by a qualified medical person. I acknowledge that my statements are being accepted by the DC Triathlon Club and are being relied on by the DC Triathlon Club Organizers and the administrators in permitting me to participate in any organized Club Event. In consideration for allowing me to become a Club Member in the DC Triathlon Club and allowing me to participate in Club Events, I hereby take the following action for myself, my executors, administrators, heirs, next of kin, successors and assigns: a) I AGREE to abide by the Competitive Rules adopted by USA Triathlon, including the Medical Control Rules, as they may be amended from time to time, and I acknowledge that my Club membership may be revoked or suspended for violation of the Competitive Rules; b) I AGREE to abide by DC Triathlon Club rules and code of conduct, as they may be modified at any time and at DC Triathlon Club's sole discretion, and by the rules established for any DC Triathlon Club Event; c) I WAIVE, RELEASE, AND DISCHARGE, from any and all claims or liabilities for death, personal injury, property damage, theft or damages of any kind, which arise out of or relate to my participation in, or my traveling to and from an organized Club Event, THE FOLLOWING PERSONS OR ENTITIES: DC Triathlon Club, Club Sponsors, DC Triathlon Club volunteers, all states, cities, countries or localities in which Club functions or segments of Club functions and held, and the officers, directors, employees, representatives, and agents of any of the above; d) I AGREE NOT TO SUE any of the persons or entities mentioned above for any of the claims or liabilities that I have waived, released or discharged herein; and e) I INDEMINIFY AND HOLD HARMLESS the persons or entities mentioned above from any claims made or liabilities assessed against them as a result of my actions during an organized Club function. I HEREBY AFFIRM THAT I AM EIGHTEEN (18) YEARS OF AGE OR OLDER, I HAVE READ THIS DOCUMENT, AND I UNDERSTAND ITS CONTENTS. If the applicant is under eighteen (18) years of age, their parent/guardian must sign this annual waiver and release form and an additional release available from the Club.
237 queries in 1.170 seconds.