“The Training Diaries” is a monthly series of posts by Lindsey Jerdonek, a DC Tri Club member, and third-year professional triathlete. In January 2012 Lindsey quit her day job and made the move to racing as a full-time pro triathlete. This is her fourth entry in the series where she will keep us posted as she figures out this new endeavor. In the most recent post, Lindsey talks about her experience competing in the San Diego World Triathlon Series (WTS). 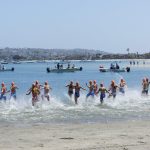 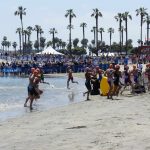 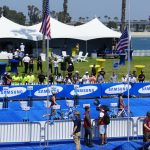 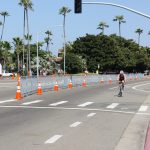 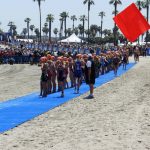 “The Training Diaries” is a monthly series of posts by Lindsey Jerdonek, a DC Tri Club member, and third-year professional triathlete. In January 2012 Lindsey quit her day job and made the move to racing as a full-time pro triathlete. You can follow Lindsey’s Blog where she documents this new endeavor or follow her on twitter.

Earlier this month I competed in the San Diego World Triathlon Series (WTS) race. The second stop on the WTS circuit, the race also served as the second US Olympic trials race (the first being the London Olympics test event last August). WTS racing is the highest level of draft-legal racing and this was my first time racing at such a level. And how did it go? It’s fair to say that I received an ass-whooping.

I was 33rd on the wait list when the initial start list was posted a month before the race and did not think I would get the chance to race at first. A WTS event is limited to 70 athletes per gender with a maximum of 6 athletes per country, although the host country is allotted more start positions, meaning I could get in. Surprisingly, enough athletes dropped from the start list that I earned a start. It made sense for me to race from a development standpoint, even though I’m not yet on WTS level.

The Race: Before the race starts, athletes are announced by ranking and pick a spot on the blue mat.  There are slim pickings when you’re one of the highest numbers!

With the blast of the horn, we were off. I am the butt without a name on it:

On the second lap I was overwhelmed with the roughness in the water, and despite my coach’s warnings of how violent these swims are, I found myself dropping farther back as the second lap went on. Also, my endurance is a work in progress. Exiting the water I dangled off the back of the pack and lost ground running through the sand to transition. My transition was one of the slowest and those are crucial seconds you can’t give up in this kind of life-or-death racing. Here I trailed a Canadian out of T1:

I did not join up with the pack immediately in front of me, even though they were SO CLOSE.  This left me with a lonely 40k ride. I thought it was funny to have had pre-race worries about riding in a large pack and here I was, riding solo:

I always had the foot on the gas, but when I saw girls behind me being lapped out by the lead pack, my motivation surged to new levels. I set a goal of not getting lapped out!  I rode as hard as I could in the closing laps. It was great to hear “Go Lindsey” around the bike course from the DC Tri Clubbers who were out there to race themselves. IT REALLY HELPED ME. Thank you.

I finally reached T2 as the last athlete to not get lapped out and was surprised at the continued crowd support. Chants of “USA!” followed me as I ran out of transition even though I was in last place. Not long into the run I called it a day. Having run out of fluids during the bike, I was dehydrated and decided not to do more damage with the Columbia Triathlon the following weekend. With the disappointment, I cried and hid for a while after handing in my timing chip.

My race did not go as I expected, but the experience was invaluable. Now I know the level required to be at WTS level. I also learned that you have to be spot-on with all of the “little things” in order to have a successful race at the WTS level – swim positioning, transitions, pack riding, etc.  This will take more practice in race situations.

Laura Bennett punched her ticket to London with her third place finish, joining Sarah Groff and Gwen Jorgensen—both qualified at the first event last year. I walked away with more experience (my spin on DNF) and look forward to the build to 2016.

March, 2018
Pat Dougherty What do you do for a day job? I’m an aerospace/operational physiologist in the Navy.  My current assignment is with a special pro... 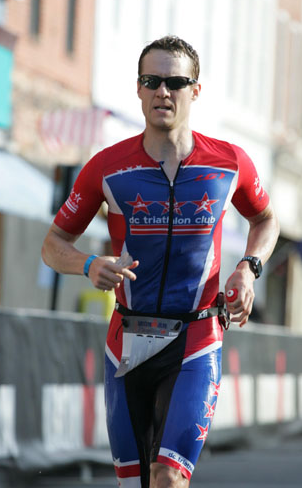 January, 2018
Justin Bauer What do you do for a day job? I work in IT and manage a team of programmers and business analysts. I’m able to telecommute full tim...

January, 2013
Over the next few months we’ll be running a series on the real lives of the Age Group triathlete. We’ll chronicle the ups and downs, victo...

By checking the box below, you agree, warrant and covenant as follows: I acknowledge that a triathlon or multisport event or training can be an extreme test of a person's physical and mental limits and carries with it the potential for death, serious injury, and property loss. I HEREBY ASSUME THE RISKS OF PARTICIPATING IN ALL DC TRIATHLON CLUB FUNCTIONS, including training, educational and social events (collectively, "Events"). I certify that I am physically fit, have sufficiently trained for participation in DC Triathlon Club Events and have not been advised otherwise by a qualified medical person. I acknowledge that my statements are being accepted by the DC Triathlon Club and are being relied on by the DC Triathlon Club Organizers and the administrators in permitting me to participate in any organized Club Event. In consideration for allowing me to become a Club Member in the DC Triathlon Club and allowing me to participate in Club Events, I hereby take the following action for myself, my executors, administrators, heirs, next of kin, successors and assigns: a) I AGREE to abide by the Competitive Rules adopted by USA Triathlon, including the Medical Control Rules, as they may be amended from time to time, and I acknowledge that my Club membership may be revoked or suspended for violation of the Competitive Rules; b) I AGREE to abide by DC Triathlon Club rules and code of conduct, as they may be modified at any time and at DC Triathlon Club's sole discretion, and by the rules established for any DC Triathlon Club Event; c) I WAIVE, RELEASE, AND DISCHARGE, from any and all claims or liabilities for death, personal injury, property damage, theft or damages of any kind, which arise out of or relate to my participation in, or my traveling to and from an organized Club Event, THE FOLLOWING PERSONS OR ENTITIES: DC Triathlon Club, Club Sponsors, DC Triathlon Club volunteers, all states, cities, countries or localities in which Club functions or segments of Club functions and held, and the officers, directors, employees, representatives, and agents of any of the above; d) I AGREE NOT TO SUE any of the persons or entities mentioned above for any of the claims or liabilities that I have waived, released or discharged herein; and e) I INDEMINIFY AND HOLD HARMLESS the persons or entities mentioned above from any claims made or liabilities assessed against them as a result of my actions during an organized Club function. I HEREBY AFFIRM THAT I AM EIGHTEEN (18) YEARS OF AGE OR OLDER, I HAVE READ THIS DOCUMENT, AND I UNDERSTAND ITS CONTENTS. If the applicant is under eighteen (18) years of age, their parent/guardian must sign this annual waiver and release form and an additional release available from the Club.
242 queries in 1.549 seconds.