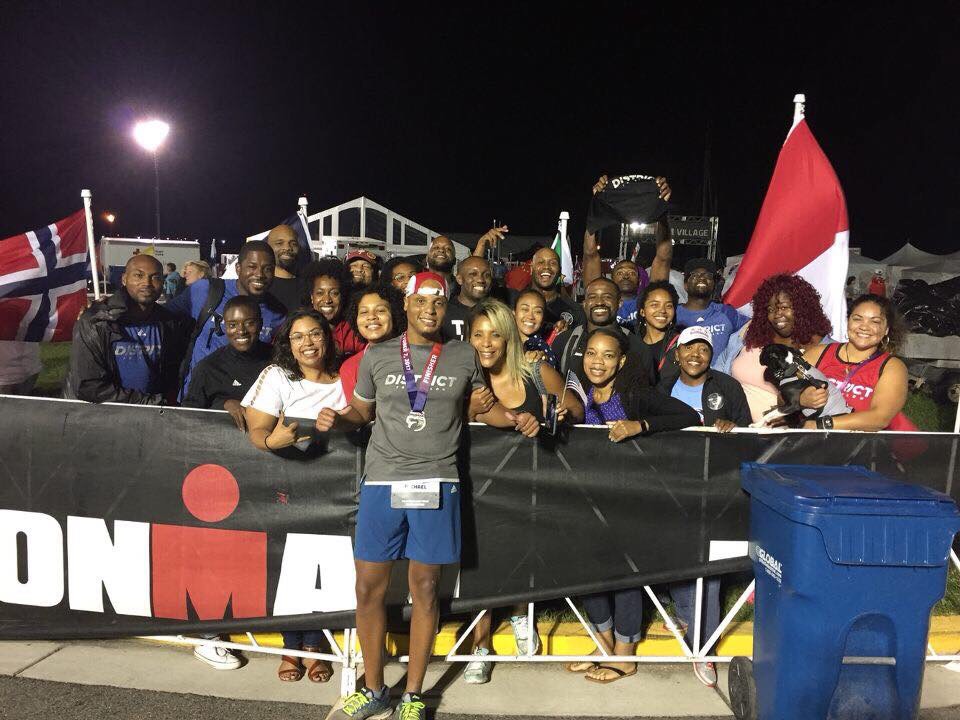 I initially got involved in triathlons after becoming a member of Team Red, White and Blue. After training with the local Philadelphia chapter and competing in running events, I wanted to push myself to try something new. From there, I began to train with other members of the chapter in route to my first triathlon.

My first triathlon was back in 2014 at a Presidential Lakes in New Jersey.

The biggest mistake I’ve made in triathlon is forgetting to have fun. Sometimes we get so wrapped up in the analytics of the sport and forget that we do it because we enjoy it.

The most memorable experience for me has to be doing Ironman Maryland in 2017. I was in such a rough place at that time so dedicating my time and mental capacity to that race was life saving! Also, seeing all of my teammates from District Triathlon come out to support me kept me going throughout the day.

What are some other clubs that you are involved in?

Outside of DC Tri Club, I am a member of District Triathlon, Team Red, White and Blue, Rapha Cycling Club, District Running Collective, Track Tuesdays, Urban Athletic Club, and Back on My Feet.

How do you find they complement each other?

While being a member on so many teams can be exhausting, they all serve a purpose, as well as provide me with a sense of community throughout my networks. Being a minority in a sport that is not diverse at all often made me feel like an outsider. Having a group like District Triathlon has played a HUGE role in my life as their mission is to encourage, inspire, support and increase the participation of People of Color in triathlon and endurance sports, promote healthy lifestyles and uplift communities in DC and the Washington metropolitan area.

After serving in the Navy for eight years I had a difficult time transitioning back to civilian life. Having a community like Team Red, White and Blue that helps service members transition through physical activities was a no brainer. I was hooked since I went out to my first rock climbing event back in 2013 while living in Philly.

Clubs like Urban Athletic Club (Crossfit Shaw), Rapha Cycling Club, District Running Collective and Track Tuesdays provide me with a community of consistent athletes that are focusing on one specific activity.  Riding with Rapha allows me to push myself as a cyclist with actual cyclist, or running with District Running Collective a bit harder with people who focus on running. As an endurance athlete I am never able to consistently do strength training. Being a member of UAC/Crossfit Shaw allows me to take the thinking out of my strength program. In the end, when it’s time for race day, I am able to put it all together as a stronger, and faster triathlete.

Lastly, Back on my Feet is a nonprofit that combats homelessness through the power of running, community support and essential employment and housing resources. Recognizing the importance in the work they do, and understanding that I can support by simply going for a run with their members is something I try to do as often as possible.

There are things to enjoy outside of triathlon?! Tri FOR LIFE!

January, 2022
Erik has casually been running and biking most of his life and became interested in triathlons after he got bored of just biking and running all the t...

July, 2019
What type of off road cycling do you do? This year I tried my first mountain bike races. I have a gravel race and a gravel crit coming up in August an...

July, 2020
How did you get involved in triathlons? Joe: I used to work with Dena Richardson, who was a member of the club, and biked on her Fall Colors Ride from...

By checking the box below, you agree, warrant and covenant as follows: I acknowledge that a triathlon or multisport event or training can be an extreme test of a person's physical and mental limits and carries with it the potential for death, serious injury, and property loss. I HEREBY ASSUME THE RISKS OF PARTICIPATING IN ALL DC TRIATHLON CLUB FUNCTIONS, including training, educational and social events (collectively, "Events"). I certify that I am physically fit, have sufficiently trained for participation in DC Triathlon Club Events and have not been advised otherwise by a qualified medical person. I acknowledge that my statements are being accepted by the DC Triathlon Club and are being relied on by the DC Triathlon Club Organizers and the administrators in permitting me to participate in any organized Club Event. In consideration for allowing me to become a Club Member in the DC Triathlon Club and allowing me to participate in Club Events, I hereby take the following action for myself, my executors, administrators, heirs, next of kin, successors and assigns: a) I AGREE to abide by the Competitive Rules adopted by USA Triathlon, including the Medical Control Rules, as they may be amended from time to time, and I acknowledge that my Club membership may be revoked or suspended for violation of the Competitive Rules; b) I AGREE to abide by DC Triathlon Club rules and code of conduct, as they may be modified at any time and at DC Triathlon Club's sole discretion, and by the rules established for any DC Triathlon Club Event; c) I WAIVE, RELEASE, AND DISCHARGE, from any and all claims or liabilities for death, personal injury, property damage, theft or damages of any kind, which arise out of or relate to my participation in, or my traveling to and from an organized Club Event, THE FOLLOWING PERSONS OR ENTITIES: DC Triathlon Club, Club Sponsors, DC Triathlon Club volunteers, all states, cities, countries or localities in which Club functions or segments of Club functions and held, and the officers, directors, employees, representatives, and agents of any of the above; d) I AGREE NOT TO SUE any of the persons or entities mentioned above for any of the claims or liabilities that I have waived, released or discharged herein; and e) I INDEMINIFY AND HOLD HARMLESS the persons or entities mentioned above from any claims made or liabilities assessed against them as a result of my actions during an organized Club function. I HEREBY AFFIRM THAT I AM EIGHTEEN (18) YEARS OF AGE OR OLDER, I HAVE READ THIS DOCUMENT, AND I UNDERSTAND ITS CONTENTS. If the applicant is under eighteen (18) years of age, their parent/guardian must sign this annual waiver and release form and an additional release available from the Club.
236 queries in 3.408 seconds.