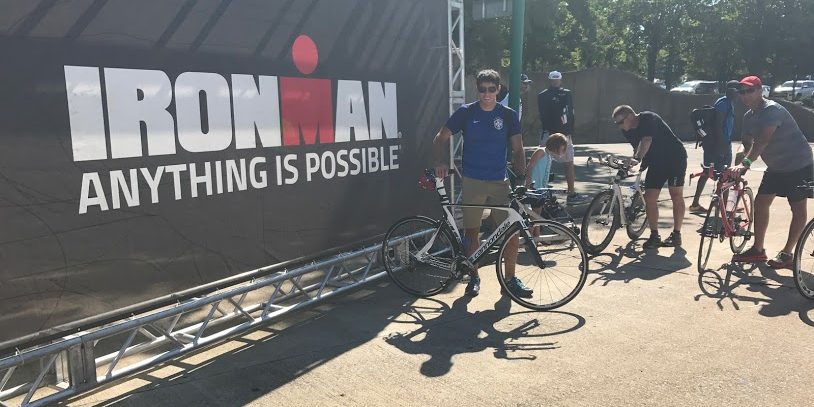 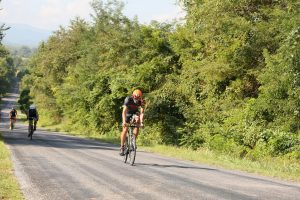 After running a number of marathons I thought the prospect of doing different sport disciplines was intriguing, so I decided to give it a try.

It was Atlantic City Olympic in 2012. I had a heavy, 8-speed/steel road bike I used to use for commuting around the city. It was immediately demoralizing for me to get passed so much on the bike by so many people who were far less fit than I was, so the next year I decided to invest in a carbon/10 speed tri bike because I thought it was what I needed. That was a naive decision in retrospect cause I think tri bikes are only designed for one thing and are far less enjoyable than road bikes…but I still race that same tri bike on relatively flat courses, though I’ve changed everything on it but the frame.

In 2014, I went up to Philadelphia to do an Olympic race. It must have been my 5th/6th triathlon by then, so I already knew what I needed to pack/bring with me. I’m usually quite good at remembering what I need for any given occasion, and I am not a checklist kind of person. Anyway, I was sure I had everything with me so I drove up to Philly, went to the expo, got my race packet, etc etc, but then when I passed booth where they sold running shoes I realized I wasn’t wearing my running shoes at the time and was wearing a different pair of sneakers. So I immediately knew I had left my running shoes behind and I was forced to having to buy a brand new pair of running shoes to race the next day, which everyone knows you never want to race on a pair of shoes you haven broken in. On top of that, when I was back at the hotel and setting up my bike/getting things ready for the next morning I couldn’t find my bike shoes anywhere…So, sure enough, I had put both my running AND my cycling shoes in the same bag and left that bag on my couch at home, and I didn’t double check that I had it with me before I drove off to Philly. So not only did I have to do a race wearing brand new running shoes, but I also had to do the bike leg wearing running shoes. So, the time I was aiming to finish in….. yeah, I didn’t get it.

In 2016, I did my first Ironman in Chattanooga under excruciating heat/humidity (they claimed it was the hottest September day on record). It was memorable not only because it was my first IM, but also because of how mentally testing it was and the different thoughts that went through my head at the various stages of the race. I guess it was a pretty humbling experience as well because I’m very competitive in nature, and I tend to have an attitude of, If I’m not racing at/near the top of the field then it’s a waste of my time. And the weather that day affected my performance and I definitely didn’t get the kind of time I know I could have had under more ideal racing conditions. So, after that I’ve been more relaxed about my racing and my approach change from, “I want to beat the field” to “I’m just gonna do the best I can today and see where I end up.” Ultimately, I decided I’m best suited for Olympic distance races rather than long course ones cause I don’t have to worry about pacing as much and I can go harder for a shorter time than longer and slower. I’m sure I’ll do another full distance IM at some point but maybe when I have more time flexibility.

Since you travel for work, how do you train while traveling?

I tend to focus on high intensity interval training and VO2 max sessions. If I have access to a hotel gym where I am, then I do those sessions on the treadmill along with strength training so as to not lose a lot of fitness while I’m out of the country. If I don’t have a gym then I take resistance bands for strength training and a jump rope for HITT/cardio sessions. If I go to relatively safe areas, I try to look up Hash Hash Harrier chapters to get out and go on group runs and explore a bit. Last year I spent quite a bit of time in Sub-Saharan Africa and so was running in the Sahara desert on the weekends, which was pretty neat (but REALLY HOT!).

Have you done any races in Latin America?

I visit my family in Chile every year, and in recent years I’ve been doing events each time I’ve visited. In 2017 I did an IM branded half in Pucon, toward the south of Chile. It’s one of the most beautiful places I’ve ever been in (great volcanic scenery all throughout the race, and 70 degree temperature). Last year I did a half marathon in Santiago, which was cool cause a lot of my family came out to cheer (although a bit embarrassing too). And I’ll be looking to doing some more road cycling races in the future, as well as mountain biking and trail running. After all, Chile is one of the best places in the world for outdoor sports and it’s a good way to burn off all the food my family feeds….

This might be blasphemous to some (if not most!) but I’m not a die-hard triathlete… Soccer was my first love and will always be #1. I started playing probably when I started walking and it was my life until I stopped playing competitively in college. Then I tried a bunch of other sports like rugby, tennis, water polo, boxing, and some others but because most team sports require schedule commitments, it was hard to stick to them. So that lead me to running and cycling and triathlon, because you can train for those on your own time. I’ve gotten back into soccer a little over the past year or so and play pickup games here and there. And since I travel a lot abroad for work, I sometimes get to play with locals on the weekends.

I didn’t really start learning how to swim until around age 20…. I wanted to get into SCUBA diving, and my university offered it as a gym credit. But I needed to swim certain distances (I think like a 1/4 mile freestyle/breaststroke without stopping, and 25m underwater on one breath) in order to show I could be safe in the water. So I had to take beginner swimming, and then I continued with intermediate and advance swimming. I figured I should know more than just basic swimming if I someday want to work my way up to master diver level. So you can guess which triathlon discipline I’m weakest at/enjoy least (if at all!)…

January, 2019
Sophia first tried her hand at triathlon in 2016 by committing to SavageMan’s Sprint in Deep Creek Lake, MD.  With next to zero relevant athletic e...

April, 2020
How did you get involved in triathlons? I was in elementary school when I first learned about triathlons. My PE teacher recommended I do an Ironkids e...

November, 2012
“The Training Diaries” is a periodic series of posts by Lindsey Jerdonek, a DC Tri Club member, and third-year professional triathlete. ...

By checking the box below, you agree, warrant and covenant as follows: I acknowledge that a triathlon or multisport event or training can be an extreme test of a person's physical and mental limits and carries with it the potential for death, serious injury, and property loss. I HEREBY ASSUME THE RISKS OF PARTICIPATING IN ALL DC TRIATHLON CLUB FUNCTIONS, including training, educational and social events (collectively, "Events"). I certify that I am physically fit, have sufficiently trained for participation in DC Triathlon Club Events and have not been advised otherwise by a qualified medical person. I acknowledge that my statements are being accepted by the DC Triathlon Club and are being relied on by the DC Triathlon Club Organizers and the administrators in permitting me to participate in any organized Club Event. In consideration for allowing me to become a Club Member in the DC Triathlon Club and allowing me to participate in Club Events, I hereby take the following action for myself, my executors, administrators, heirs, next of kin, successors and assigns: a) I AGREE to abide by the Competitive Rules adopted by USA Triathlon, including the Medical Control Rules, as they may be amended from time to time, and I acknowledge that my Club membership may be revoked or suspended for violation of the Competitive Rules; b) I AGREE to abide by DC Triathlon Club rules and code of conduct, as they may be modified at any time and at DC Triathlon Club's sole discretion, and by the rules established for any DC Triathlon Club Event; c) I WAIVE, RELEASE, AND DISCHARGE, from any and all claims or liabilities for death, personal injury, property damage, theft or damages of any kind, which arise out of or relate to my participation in, or my traveling to and from an organized Club Event, THE FOLLOWING PERSONS OR ENTITIES: DC Triathlon Club, Club Sponsors, DC Triathlon Club volunteers, all states, cities, countries or localities in which Club functions or segments of Club functions and held, and the officers, directors, employees, representatives, and agents of any of the above; d) I AGREE NOT TO SUE any of the persons or entities mentioned above for any of the claims or liabilities that I have waived, released or discharged herein; and e) I INDEMINIFY AND HOLD HARMLESS the persons or entities mentioned above from any claims made or liabilities assessed against them as a result of my actions during an organized Club function. I HEREBY AFFIRM THAT I AM EIGHTEEN (18) YEARS OF AGE OR OLDER, I HAVE READ THIS DOCUMENT, AND I UNDERSTAND ITS CONTENTS. If the applicant is under eighteen (18) years of age, their parent/guardian must sign this annual waiver and release form and an additional release available from the Club.
220 queries in 2.287 seconds.