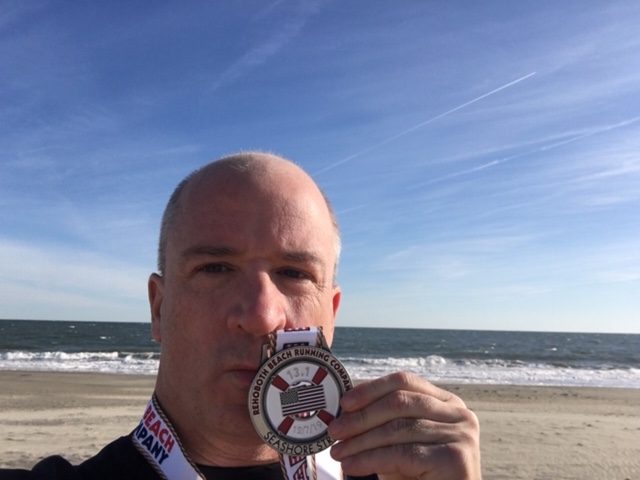 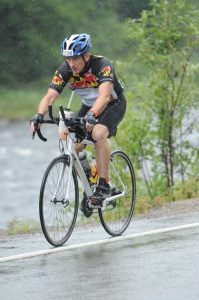 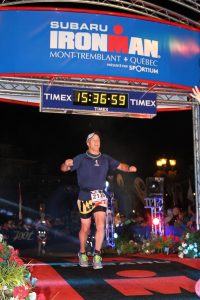 In the late 1990s, I started doing the Masters Swimming program at Hains Point. Through that I started doing Open Water swimming, but I also met a lot of triathletes. Triathlon sounded really awesome, but I had one small problem – I didn’t know how to ride a bike. Through my then-fiancée, who was a cyclist, I ended up learning to ride in the early 2000s. However, I stopped swimming after that because with starting a family, I did not have the time for it. I did continue to ride and was doing Century rides. Fast-forward to 2011 – after I had done a metric century in March, my boss said “you should do the Eagleman Aquabike in June. You are already trained for the bike and since you used to swim, you could probably be ready in two months.”

I signed up and went to the race in June. While I was in line at the port-a-johns, I was stuck behind this obnoxious man bragging to a woman out of his league about his triathlon experiences when a volunteer came up to me and, spying the age on my leg, told me I needed to get to the start line because my age group was going off. After I explained to the volunteer that I was doing the Aquabike and going off last, the woman interrupted the man and asked what happened. The man replied “Oh, he’s JUST doing the Aquabike.” I was so pissed that I vowed at that moment that I would be back next year to do the whole thing (and I did).

My first triathlon was the Terrapin Triathlon at the University of Maryland in 2012. It is a sprint triathlon with the swim in the indoor pool. It was nice because it was only 10 minutes from my house and since I went to Maryland, I was familiar with the terrain.

I made two huge mistakes the day before I did the Eagleman Aquabike in 2011. First I decided to attend a family graduation party in Harrisburg, PA. Leaving at 8:00am, I drove from Silver Spring to Cambridge to rack my bike, back to Silver Spring (getting stuck in Bay Bridge traffic), to Harrisburg for the party and returned home about 10 that night – about 8 hours of driving to attend a 3 hour party. And I still had to wake up at 3:00 the next day to get back to Cambridge. The second mistake was bringing a 6-year old with me to bike racking and not realizing that they would not let him in with me, meaning I had to leave him outside of transition. I think he is still scarred from the experience.

Mont-Tremblant in 2016 was special because it was my first (and likely last) Ironman and my family was able to share the moment with me. I probably had my best race at Timberman, and I am sad that it is no longer an event. My favorite local triathlon is Rock Hall, and I plan on doing it again this year.

What races are you doing this year?

I have decided that this year will be a swimming year. I signed up for the Chesapeake Bay Swim in June and the Traversee du Lac Tremblant, a 12k swim a week before the Ironman in August. I hope to do a couple of local Olympic triathlons, including Rock Hall and Waterman’s.

My time outside of triathlon is usually spent driving to and attending the sporting events of my daughter (who is also a DC Tri member) and my son. I enjoy going to concerts (already psyched for Green Day in August) and watching Maryland Basketball and Philly sports.

I will share my “Two Truths and a Lie”, and you can figure it out.

1. I was compared favorably to a Hall of Fame shortstop in the local newspaper for a play I made in Little League.
2. I coached a basketball player when he was in the 7th grade who was later compared to Michael Jordan.
3. I was referred to in a critically-acclaimed Christmas song.

June, 2018
BART FORSYTH Bart is the Snapple Team Director and is so excited to have been with the program from the start.  In 2010, Bart tooked third overall at...

June, 2018
EMILY RICHARD I started doing triathlon after years of competitive running through high school, college and post-college.  I made the switch to triat...

June, 2018
Justin completed his first triathlon in 2010 and joined the DC Triathlon Club the following year. He has participated in the club’s Olymp...

By checking the box below, you agree, warrant and covenant as follows: I acknowledge that a triathlon or multisport event or training can be an extreme test of a person's physical and mental limits and carries with it the potential for death, serious injury, and property loss. I HEREBY ASSUME THE RISKS OF PARTICIPATING IN ALL DC TRIATHLON CLUB FUNCTIONS, including training, educational and social events (collectively, "Events"). I certify that I am physically fit, have sufficiently trained for participation in DC Triathlon Club Events and have not been advised otherwise by a qualified medical person. I acknowledge that my statements are being accepted by the DC Triathlon Club and are being relied on by the DC Triathlon Club Organizers and the administrators in permitting me to participate in any organized Club Event. In consideration for allowing me to become a Club Member in the DC Triathlon Club and allowing me to participate in Club Events, I hereby take the following action for myself, my executors, administrators, heirs, next of kin, successors and assigns: a) I AGREE to abide by the Competitive Rules adopted by USA Triathlon, including the Medical Control Rules, as they may be amended from time to time, and I acknowledge that my Club membership may be revoked or suspended for violation of the Competitive Rules; b) I AGREE to abide by DC Triathlon Club rules and code of conduct, as they may be modified at any time and at DC Triathlon Club's sole discretion, and by the rules established for any DC Triathlon Club Event; c) I WAIVE, RELEASE, AND DISCHARGE, from any and all claims or liabilities for death, personal injury, property damage, theft or damages of any kind, which arise out of or relate to my participation in, or my traveling to and from an organized Club Event, THE FOLLOWING PERSONS OR ENTITIES: DC Triathlon Club, Club Sponsors, DC Triathlon Club volunteers, all states, cities, countries or localities in which Club functions or segments of Club functions and held, and the officers, directors, employees, representatives, and agents of any of the above; d) I AGREE NOT TO SUE any of the persons or entities mentioned above for any of the claims or liabilities that I have waived, released or discharged herein; and e) I INDEMINIFY AND HOLD HARMLESS the persons or entities mentioned above from any claims made or liabilities assessed against them as a result of my actions during an organized Club function. I HEREBY AFFIRM THAT I AM EIGHTEEN (18) YEARS OF AGE OR OLDER, I HAVE READ THIS DOCUMENT, AND I UNDERSTAND ITS CONTENTS. If the applicant is under eighteen (18) years of age, their parent/guardian must sign this annual waiver and release form and an additional release available from the Club.
247 queries in 3.400 seconds.