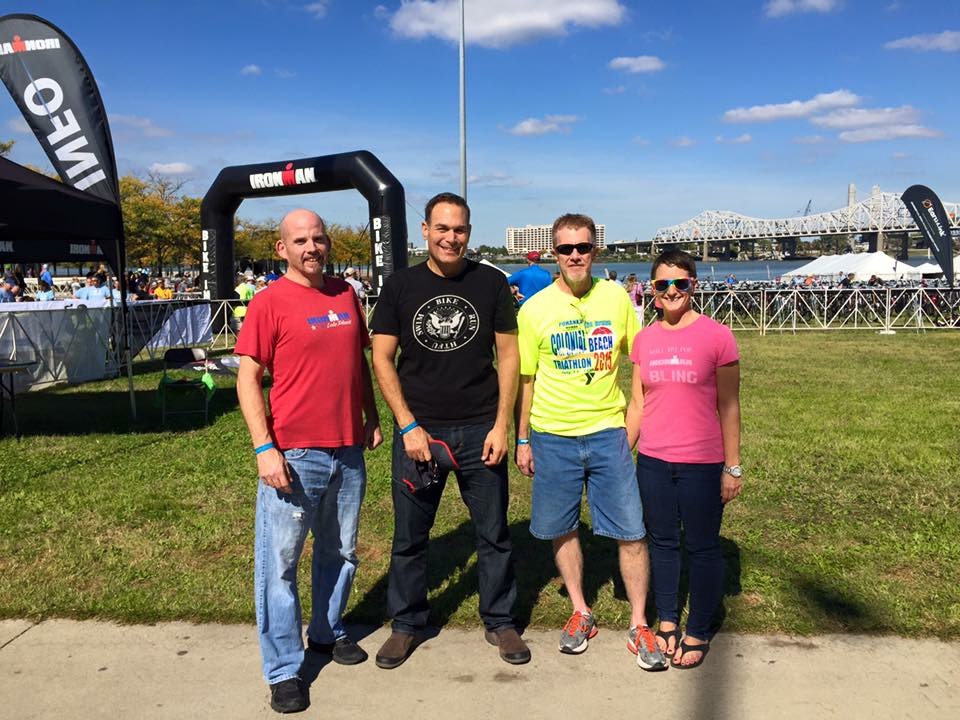 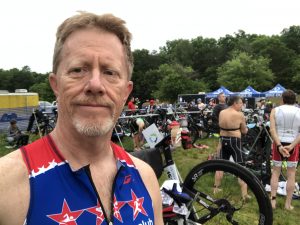 Triathlon at first was a “climb the mountain, I’m gonna do this once,” LOL. I had always watched Kona Championships for years, and enjoyed the battle of the Titans; Mark Allen and Dave Scott, the dominance of Chrissie Wellington, Marinda Carfrae and her epic marathon run. As a competitor I was drawn to that level of effort and excellence.

So after 2 of my 3 kids were out of the house, I’m 48 years old and have some much earned free time on my hands, so I started training; Swimming: the first couple sessions I could barely put 200 meters together without being totally gassed, I kept at it, and finally after 4 months I put together 400meters, LOL. I didn’t let the lack of progress hinder me as I knew I would eventually get there.

Biking: for 2 years, I used my daughters hybrid bike with the triangular saddle with the all-terrain tires on it, My first long ride was 10 miles, and I was really gassed, my legs were on fire, and I’m like man this is gonna be way harder than I thought.

Running: Not much different, I had run in HS and local 10K’s and 10 milers in my younger days, and I was pretty fast. So I thought I would still have that in me, wrong again. I never achieved the same feeling and rhythm I used to run with, I think it’s called getting old.

So I set out to train, with my eye on a sprint Triathlon, mind you had no friends in Triathlon, nor new nothing about it, I also foolishly thought this could be an economical sport, Wrong Again.

My first planned race was 2009 Pocomoke Sprint Tri on the Eastern Shore, open water and everything. I did some indoor tri’s to get a feel for what the real event would be like, and they helped some, but didn’t leave me reeling with confidence. I still needed cycling shorts, I was a complete newbie running blind. So I take my oldest son with me, just in case I couldn’t function when I finished. I was incredibly nervous, just wasn’t sure how it would go, and it was hot! The swim started, and i was ok at first, but then about 1/2 way, my arms started getting really heavy like I’m done heavy, huge lactic build-up, and I panicked I was gonna drown or something, but kept pushing made it to within 50 yds of shore, shallow enough to walk. I could see my son on shore, kinda laughing….so made it to T1 and was gassed, got on my bike and that worked well, quick 15 miles, then the run, only a 5K, but I had nothing, so I walked and ran walked and ran….finally finished which i was happy about, my time was over 2 hours and I was so done. Or so I thought….I eventually got with a masters swim program, a friend who gave me some bike hints, like get a real bike and that led to being introduced about 7 yrs ago to the MoCo Mafia. More later.

Biggest Mistakes: starting one race with my wet-suite unzipped, found that doesn’t work well when you dive into swim, LOL…..taking off from T2 with my cycling diaper on….taking off from T2 without my race number…of course when I was introduced to cycling shoes with clips…my many funny moments of falling over right next to cars on the road, I was laughing when I fell, but they were looking at me like I’m nuts

I have 2 very memorable experiences: 1 good, 1 not so good, but ended up good.

Kinetic 1/2 – 2015 – I was riding behind a rider on a downhill, road open to traffic, minimal shoulder, drainage ditch aside the shoulder…so a car somewhat moved into riders way, forcing him off the road, as I watched him do a full flip on his bike and he was down….so I guess it was instinct that a braked pretty hard got off the road, and ran to help him. he was trying to move and get, and I told him to lay still as I was holding his head. I asked him basic awareness questions and he seemed to get through those, then he said his back hurt bad, and then it was I’m having trouble breathing….here’s an oh s— moment…so I’m yelling for cars that had sort of stopped to rubber neck and I’m yelling for someone to call 911. I have no idea how long I was there, finally an ambo pulled up, so I got out of their way, I was freaking out about having someone go downhill quickly…. turns out he was eventually airlifted from a local Hospital to JHU in Baltimore with a serious spinal injury. I never knew the gentleman who was injured, but I connected with his family, visited him several times in JHU as he was there for 3-4 months. He has slowly recovered enough to get back on the bike and even run to a degree. Enough so, that in 2018 at Rock Hall he did the sprint Tri with a friend of his, and I did that race because of him and met him at the finish, it was so awesome to see him come back from such a serious injury. That’s what Triathlon is all about, racing against you friends, and coming to the aid of someone who is hurt, had a mech issue and so forth. That’s partly what I love about this sport, the camaraderie.

Best: The finish Line at IMLOU 2015….my Training with the Mafia over the years led me to take the plunge and try a full, 2015 was spent training, from Jan-Oct. I trained and completed the race with 4 Mafia Members; Jeff Halper, Jen Green, and Jay Cochran, without their support I’m not sure i would have made it. My wife flew down to Lou for the race, and although she was bored to tears (quite understandable) she was there to see me at times during the race, at the 2nd run loop and the finish. Finishing the full I’ll never forget that Rock Star feeling…. then anonymously spent the next hour in the med tent getting 2 quarts of fluid, LOL.. We had a great house of racers, and what a great experience. I’ll attempt to finish number 2 at IMMD in my year 60!! All of the Mafia Members who finish a full receive a nickname, which they wear proudly within the group. I’m fondly named Iron Grandpa!

I’m into home projects, renovations. We (My wife Michele and I) now have 4 grandkids with one in the oven (coming in October). My oldest granddaughter lives with us and her mother, so i love watching them grow up and being a part of their lives. I work full time as an electrical engineer, and hoping retirement is in my future down the road. We vacation in the Outer Banks every year, and I enjoy parking myself on the beach all day with some cold ones, after a ride or run in the morning.

I love being an old school guy, in the music I listen to and the experiences I have had, always the senior member of our training group there is no shortage of good-natured ribbing coming from them. These people in the Mafia have become very good friends, and there’s not a better group of people around! 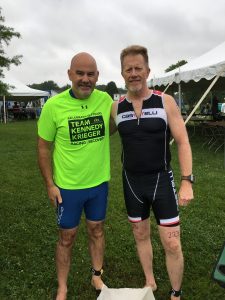 October, 2012
“The Training Diaries” is a periodic series of posts by Lindsey Jerdonek, a DC Tri Club member, and third-year professional triathlete. In...

June, 2020
How did you get involved in triathlons? Honestly, I had never even heard of Triathlon until a few years ago. Funnily enough, I met a girl who was into...

March, 2019
Justin Bauer Quirky tid-bit no one knows?  I don’t put milk on my cereal. What do you think about when you’re swimming so many yards? I think...

By checking the box below, you agree, warrant and covenant as follows: I acknowledge that a triathlon or multisport event or training can be an extreme test of a person's physical and mental limits and carries with it the potential for death, serious injury, and property loss. I HEREBY ASSUME THE RISKS OF PARTICIPATING IN ALL DC TRIATHLON CLUB FUNCTIONS, including training, educational and social events (collectively, "Events"). I certify that I am physically fit, have sufficiently trained for participation in DC Triathlon Club Events and have not been advised otherwise by a qualified medical person. I acknowledge that my statements are being accepted by the DC Triathlon Club and are being relied on by the DC Triathlon Club Organizers and the administrators in permitting me to participate in any organized Club Event. In consideration for allowing me to become a Club Member in the DC Triathlon Club and allowing me to participate in Club Events, I hereby take the following action for myself, my executors, administrators, heirs, next of kin, successors and assigns: a) I AGREE to abide by the Competitive Rules adopted by USA Triathlon, including the Medical Control Rules, as they may be amended from time to time, and I acknowledge that my Club membership may be revoked or suspended for violation of the Competitive Rules; b) I AGREE to abide by DC Triathlon Club rules and code of conduct, as they may be modified at any time and at DC Triathlon Club's sole discretion, and by the rules established for any DC Triathlon Club Event; c) I WAIVE, RELEASE, AND DISCHARGE, from any and all claims or liabilities for death, personal injury, property damage, theft or damages of any kind, which arise out of or relate to my participation in, or my traveling to and from an organized Club Event, THE FOLLOWING PERSONS OR ENTITIES: DC Triathlon Club, Club Sponsors, DC Triathlon Club volunteers, all states, cities, countries or localities in which Club functions or segments of Club functions and held, and the officers, directors, employees, representatives, and agents of any of the above; d) I AGREE NOT TO SUE any of the persons or entities mentioned above for any of the claims or liabilities that I have waived, released or discharged herein; and e) I INDEMINIFY AND HOLD HARMLESS the persons or entities mentioned above from any claims made or liabilities assessed against them as a result of my actions during an organized Club function. I HEREBY AFFIRM THAT I AM EIGHTEEN (18) YEARS OF AGE OR OLDER, I HAVE READ THIS DOCUMENT, AND I UNDERSTAND ITS CONTENTS. If the applicant is under eighteen (18) years of age, their parent/guardian must sign this annual waiver and release form and an additional release available from the Club.
251 queries in 2.395 seconds.