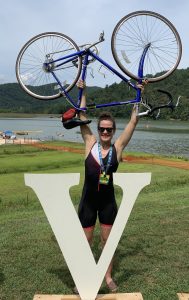 I first got the idea about doing a triathlon in my head in 2014, when I was taking a gondola up to Quito’s volcano, Pichincha. There were two people in the gondola with us who had just completed the Galapagos triathlon. I thought that was the coolest thing, not to mention a great way to enjoy the outdoors and stay healthy and fit.

I’ve always been athletic but I thought a triathlon was an unreachable goal. I kept using the “not having a bike” as an excuse for not training for one.  In January last year (2019), I moved to the DC area and my uncle gave me his 1988 Bridgestone road bike.  I no longer had an excuse!

Fortunately a friend, BJ Shannon, recommended that it would be better to train in a group setting and recommended the DC Triathlon Club’s New Triathlete Program.  I’m really grateful that she suggested it!  I learned so much through that program, felt really supported and was well-prepared for my first Olympic triathlon last August.

My first Olympic triathlon was Luray, but I did a few sprints in prep for that one.  The first one was Peasantman. Shout-out to Kate Ayoub the lead at the time who made it such a fun experience. I remember her suggesting, among other great tips and tricks, that instead of writing our age on our legs, we should write whether we were single, taken, or not available. I still think that’s a great idea and that they should do that for every race!

A few things stood out from the Luray race:

It was really humbling and inspiring to be surrounded by people on their different journeys, from people with prosthetic arms and legs to people of different ages, from teenagers to 80+, etc.

Even though I’m a good (pool) swimmer, I was very nervous in open water. The first time I tried an open water swim at Peasantman I panicked and I couldn’t even get my face in the water! When I got in the water for the Luray triathlon, I completely panicked for the first 10 minutes in the water. Fortunately, there was a woman on a kayak who stayed with me the whole time until the panic resided. I ended up getting a great swim time, despite those first moments slowing me down. After the race, I went to thank a volunteer who was cleaning up and it turned out to be the same person who was earlier in the kayak! She said she too had panicked the year before and, having survived, decided to come back and volunteer in the kayak.  It felt very full circle.

The race was amazing, but there was a participant that wiped out on his bike.  That was hard to see. The medics were taking care of him and he was able to walk, despite the blood everywhere, but it really shook me up.  It reminded me of the importance of staying focused, especially on the bike.

What has stuck with you from the New Triathlete Program?

I learned a lot, but one of the biggest take-aways was learning that it’s OK to take breaks from the training. If you are sick or miss a day, it’s not a biggie. Just keep moving rather than beating yourself up.  I also really loved that “getting a massage” was considered “part of my training”.  Training takes a toll and it’s important to listen to your body and treat it kindly! 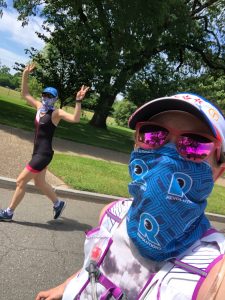 How have you been coping with this year?

Thanks to the NTP program, I had built running, biking and swimming into my routine, which has really helped during COVID.

On March 13, I actually got a new bike (not knowing what was going to happen with the pandemic), and boy have I been grateful to be able to get out and ride! A few times I’ve also gone open water swimming, which I would have never done before doing a triathlon.  It’s been great because I’ve also stopped panicking and can just enjoy the open water swimming experience!

I just did my first multi-day ride along the Great Allegheny Passage Trail, which I wouldn’t have thought of as being achievable in my pre-triathlon days. A shout-out to Jeune Rader (fellow NTP’er) for getting me to get out to do all these rides, including the GAP trail!  We rode from Pittsburgh, PA to Cumberland, MD, 150 miles over the Labor Day weekend.  Amazing!

Shoutout to all the people that have been finding creative ways to keep us active as a club, like the socially-distanced duathlon that Will Hackman organized.

You had mentioned that you spent time living abroad. Did you get to do any races?

I spent about a decade abroad, living in Spain, Germany, Switzerland, and Ecuador before moving back to the States at the end of 2018. When I was in Spain, I hadn’t gotten into running. At that point I was playing basketball and doing capoeira. By the time I moved to Germany, I’d gotten into running and did the Berlin ½ marathon two years in a row.  It’s a great route!  Def would recommend it, especially for personal best times, because it’s very flat!

In Switzerland, I did the Lausanne 20k, which is a tough race due to all of the hills. It was cool seeing the DC Tri Club Elite Team racing in Lausanne for the Triathlon World Championships last year, and being able to recognize some of the places where I’d lived.

When I lived in Quito, Ecuador (the highest capital city in the world at almost 10K ft), I completed a 15k race. It was definitely hard to get accustomed to the altitude!

I’ve learned that wherever you go, you’ll find people running, biking, swimming or doing triathlons.  Sports are very universal and it always reminds me that we are all on our own journeys, trying to live our best lives!

Sure. I’m in a band here in D.C. call the Unreliable Sources. I play the keyboard and sing. Unfortunately, we haven’t been able to play together since COVID, but hopefully soon we’ll be able to jam and you’ll be able to check out one of our shows! Last year a fellow NTP’er Jesse Pulliam happened to be walking by when we were performing at the Adams Morgan Porch Fest.  It made me feel very “local”. 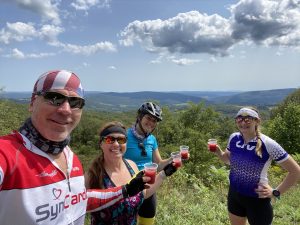 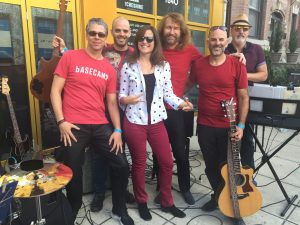 March, 2020
What was your first triathlon? Brambleton sprint. I trained with Bikeshare bikes and rented a bike on race day. Blew out my lungs in the swim and hype...

By checking the box below, you agree, warrant and covenant as follows: I acknowledge that a triathlon or multisport event or training can be an extreme test of a person's physical and mental limits and carries with it the potential for death, serious injury, and property loss. I HEREBY ASSUME THE RISKS OF PARTICIPATING IN ALL DC TRIATHLON CLUB FUNCTIONS, including training, educational and social events (collectively, "Events"). I certify that I am physically fit, have sufficiently trained for participation in DC Triathlon Club Events and have not been advised otherwise by a qualified medical person. I acknowledge that my statements are being accepted by the DC Triathlon Club and are being relied on by the DC Triathlon Club Organizers and the administrators in permitting me to participate in any organized Club Event. In consideration for allowing me to become a Club Member in the DC Triathlon Club and allowing me to participate in Club Events, I hereby take the following action for myself, my executors, administrators, heirs, next of kin, successors and assigns: a) I AGREE to abide by the Competitive Rules adopted by USA Triathlon, including the Medical Control Rules, as they may be amended from time to time, and I acknowledge that my Club membership may be revoked or suspended for violation of the Competitive Rules; b) I AGREE to abide by DC Triathlon Club rules and code of conduct, as they may be modified at any time and at DC Triathlon Club's sole discretion, and by the rules established for any DC Triathlon Club Event; c) I WAIVE, RELEASE, AND DISCHARGE, from any and all claims or liabilities for death, personal injury, property damage, theft or damages of any kind, which arise out of or relate to my participation in, or my traveling to and from an organized Club Event, THE FOLLOWING PERSONS OR ENTITIES: DC Triathlon Club, Club Sponsors, DC Triathlon Club volunteers, all states, cities, countries or localities in which Club functions or segments of Club functions and held, and the officers, directors, employees, representatives, and agents of any of the above; d) I AGREE NOT TO SUE any of the persons or entities mentioned above for any of the claims or liabilities that I have waived, released or discharged herein; and e) I INDEMINIFY AND HOLD HARMLESS the persons or entities mentioned above from any claims made or liabilities assessed against them as a result of my actions during an organized Club function. I HEREBY AFFIRM THAT I AM EIGHTEEN (18) YEARS OF AGE OR OLDER, I HAVE READ THIS DOCUMENT, AND I UNDERSTAND ITS CONTENTS. If the applicant is under eighteen (18) years of age, their parent/guardian must sign this annual waiver and release form and an additional release available from the Club.
236 queries in 2.668 seconds.