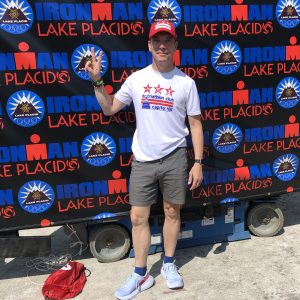 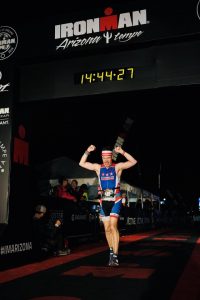 In the fall of 2017, I read a book, Fast Track Triathlete – Balancing a Big Life with Big Performance in Long-Course Triathlon, by Matt Dixon. I am an 80’s kid, and I remember seeing Julie Moss’ crawling finish on ABC’s Wide World of Sport as well as the classic duals between Dave Scott and Mark Allen. My very first triathlon was when I was 17 years old in San Luis Obispo, California. I was the only one NOT wearing a wetsuit for the open water swim. Needless to day, I was pulled out of the water about 200 yards from the shore. To this day, I remember one of the volunteers in a kayak repeatedly asking me – “are you ready to get out yet”. I kept saying no, but finally, I raised my hand. So, over 40 years later, I decided it was time to try again. So, in December 2017, I set my sights on 2018 Arizona IM.

Smithfield Sprint Triathlon in April 2018. I didn’t submit my 100 yard swim time with my online application, so I was put in the final group of swimmers. So, I was swimming around other athletes that were walking and dog paddling in the pool. It was a very long 300 yard course. But, it was so much fun. The people were amazing. Despite the “long” pool swim and biking and running in freezing rain – I was hooked.

Well, I have two. One I was able to correct. The first mistake was thinking that I can somehow train for an Ironman by reading one book. Fortunately, I discovered the DC Triathlon Club in January 2018 and signed up for the Pre-Season Race Seminar. That led me to join the club’s Half Ironman Program. A game changer for sure. My second mistake was not replacing my batteries in all my Garmin devices for Arizona IM. When I transitioned to the bike, my heart rate monitor was dead. So, from there on out, I was pacing on perceived level of effort. Not ideal, but thanks to proper training, I had an idea of where I needed to be on pace. So, from here on out, whether they need them or not, all my devices get new batteries before a race.

Entering the oval at the finish line of 2019 Lake Placid IM with my mother and wife cheering me on. This was a beast of a course and I was pushing through a few injuries (did I say I was stubborn?). At several times on the run, I would see the golf carts go up and down the road picking up athletes who raised their hands. As night fell, it was getting more and more likely that I was not going to make it. But, those boisterous, fun-loving aid stations filled with great volunteers – sometimes you get lucky and hear shouts of encouragement that resonate when you need it the most. That was mile 15 for me. I wish I could thank those volunteers – I would not have finished without their timely support. About a month after the race, I went to see a doctor and found out that I had a torn right labrum and a lower left back sprain. Maybe, my third mistake in triathlon, ignoring your body when it tells you something is wrong.

My wife and I enjoy scuba diving in warm weather climates. Putting our toes in the water and swimming with fish is a great escape – both mentally and physically. Side note – while Triathlons are not a team sport, they are a team goal. There is no way I toe the line without my wife’s support and encouragement everyday. This sport demands time and dedication – both of which are in limited supply when added to the working and other commitments. So, to my wife Carrie Baker, thank you.

I have lived in Washington, DC for over 25 years and been amazed at the progress our city has seen – to include the return of baseball and our World Series Champions. Aside from the Philly fans, attending a baseball game is one of the great things to do in our city. A Nationals win is something everybody in this city can rally around. 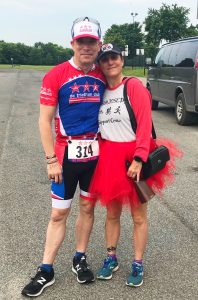 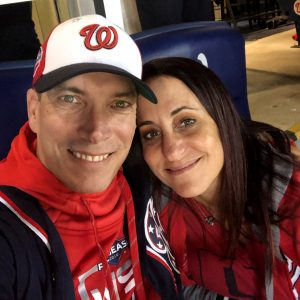 August, 2020
How did you get involved in triathlons? I signed up for the Central Park Triathlon in 2017 with some friends from my running club who were also triath...

January, 2013
I’m sitting here on a Monday morning with my muscles feeling sore and stiff as ever. The weekend left my body battered and bruised from snowboarding...

Liz Baugher on The Weather

June, 2020
Can you tell us what you do for work? I am a degree’d Meteorologist and have worked most of my time in research on ice clouds. Now I work for th...

By checking the box below, you agree, warrant and covenant as follows: I acknowledge that a triathlon or multisport event or training can be an extreme test of a person's physical and mental limits and carries with it the potential for death, serious injury, and property loss. I HEREBY ASSUME THE RISKS OF PARTICIPATING IN ALL DC TRIATHLON CLUB FUNCTIONS, including training, educational and social events (collectively, "Events"). I certify that I am physically fit, have sufficiently trained for participation in DC Triathlon Club Events and have not been advised otherwise by a qualified medical person. I acknowledge that my statements are being accepted by the DC Triathlon Club and are being relied on by the DC Triathlon Club Organizers and the administrators in permitting me to participate in any organized Club Event. In consideration for allowing me to become a Club Member in the DC Triathlon Club and allowing me to participate in Club Events, I hereby take the following action for myself, my executors, administrators, heirs, next of kin, successors and assigns: a) I AGREE to abide by the Competitive Rules adopted by USA Triathlon, including the Medical Control Rules, as they may be amended from time to time, and I acknowledge that my Club membership may be revoked or suspended for violation of the Competitive Rules; b) I AGREE to abide by DC Triathlon Club rules and code of conduct, as they may be modified at any time and at DC Triathlon Club's sole discretion, and by the rules established for any DC Triathlon Club Event; c) I WAIVE, RELEASE, AND DISCHARGE, from any and all claims or liabilities for death, personal injury, property damage, theft or damages of any kind, which arise out of or relate to my participation in, or my traveling to and from an organized Club Event, THE FOLLOWING PERSONS OR ENTITIES: DC Triathlon Club, Club Sponsors, DC Triathlon Club volunteers, all states, cities, countries or localities in which Club functions or segments of Club functions and held, and the officers, directors, employees, representatives, and agents of any of the above; d) I AGREE NOT TO SUE any of the persons or entities mentioned above for any of the claims or liabilities that I have waived, released or discharged herein; and e) I INDEMINIFY AND HOLD HARMLESS the persons or entities mentioned above from any claims made or liabilities assessed against them as a result of my actions during an organized Club function. I HEREBY AFFIRM THAT I AM EIGHTEEN (18) YEARS OF AGE OR OLDER, I HAVE READ THIS DOCUMENT, AND I UNDERSTAND ITS CONTENTS. If the applicant is under eighteen (18) years of age, their parent/guardian must sign this annual waiver and release form and an additional release available from the Club.
240 queries in 1.278 seconds.