Southeast Neighborhood Library, one of three Carnegie-funded libraries in D.C. and the second neighborhood library built, proved to be one of the library system’s busiest from its opening on Dec. 8, 1922. The one-story brick building, designed by noted library architect Edward L. Titlton, sits at 403 7th St. SE on an irregularly shaped site in the Capitol Hill National Register District, purchased with $8,360 from Congress, and bolstered by $67,000 in construction funding from the Carnegie Corporation.

The library opened with a collection of some 5,000 volumes and 75 periodicals. It was expected that the collection would be frequently supplemented by deliveries from the already overcrowded central library, which at that time contained nearly 250,000 volumes. The branch was set to be open most weekdays from noon to 9 p.m., on Wednesdays from noon to 3 p.m., and on Saturdays from 9 a.m. to 9 p.m. The staff consisted of branch librarian Frances S. Osborne, a children’s librarian, an assistant, a page and a janitor.

The Southeast library was immediately successful, with an average daily circulation of 550 books during its first two weeks of operation. A growing concern was the demand for juvenile literature; at the time of its opening, the library had only a modest collection. Nearly 1,400 extra books had to be transferred to Southeast from the Central Library to meet the demand. By the end of June 1923, after only seven months of operation, the library had circulated 86,822 books and registered 3,904 patrons.

The book collection had grown during the same period from the initial 5,000 volumes to nearly 8,000 through purchases, gifts, transfers and borrowed books. On Jan. 4, 1937, the Southeast Branch experienced its largest one-day circulation count—1,777 books. The library quickly took on an important community and educational role within the neighborhood, offering a quiet and safe place for school children to study after school hours. The large meeting rooms also provided a centralized location for community meetings.

After World War II, the branch served a population of 20,419 persons within a half-mile radius. The area surrounding the library was generally residential with a busy retail district nearby. Since its opening, however, the neighborhood character of the community had slowly been encroached upon by the construction of government buildings on Capitol Hill. In 1947, the area served by the Southeast Branch encompassed 12 public schools, four parochial schools, the Friendship Settlement House, Providence Hospital, the Naval Gun Factory and the Marine Barracks. 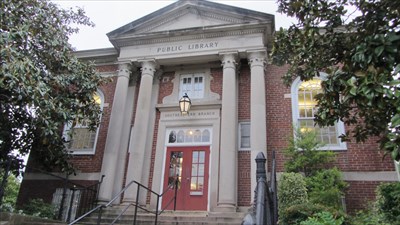 By checking the box below, you agree, warrant and covenant as follows: I acknowledge that a triathlon or multisport event or training can be an extreme test of a person's physical and mental limits and carries with it the potential for death, serious injury, and property loss. I HEREBY ASSUME THE RISKS OF PARTICIPATING IN ALL DC TRIATHLON CLUB FUNCTIONS, including training, educational and social events (collectively, "Events"). I certify that I am physically fit, have sufficiently trained for participation in DC Triathlon Club Events and have not been advised otherwise by a qualified medical person. I acknowledge that my statements are being accepted by the DC Triathlon Club and are being relied on by the DC Triathlon Club Organizers and the administrators in permitting me to participate in any organized Club Event. In consideration for allowing me to become a Club Member in the DC Triathlon Club and allowing me to participate in Club Events, I hereby take the following action for myself, my executors, administrators, heirs, next of kin, successors and assigns: a) I AGREE to abide by the Competitive Rules adopted by USA Triathlon, including the Medical Control Rules, as they may be amended from time to time, and I acknowledge that my Club membership may be revoked or suspended for violation of the Competitive Rules; b) I AGREE to abide by DC Triathlon Club rules and code of conduct, as they may be modified at any time and at DC Triathlon Club's sole discretion, and by the rules established for any DC Triathlon Club Event; c) I WAIVE, RELEASE, AND DISCHARGE, from any and all claims or liabilities for death, personal injury, property damage, theft or damages of any kind, which arise out of or relate to my participation in, or my traveling to and from an organized Club Event, THE FOLLOWING PERSONS OR ENTITIES: DC Triathlon Club, Club Sponsors, DC Triathlon Club volunteers, all states, cities, countries or localities in which Club functions or segments of Club functions and held, and the officers, directors, employees, representatives, and agents of any of the above; d) I AGREE NOT TO SUE any of the persons or entities mentioned above for any of the claims or liabilities that I have waived, released or discharged herein; and e) I INDEMINIFY AND HOLD HARMLESS the persons or entities mentioned above from any claims made or liabilities assessed against them as a result of my actions during an organized Club function. I HEREBY AFFIRM THAT I AM EIGHTEEN (18) YEARS OF AGE OR OLDER, I HAVE READ THIS DOCUMENT, AND I UNDERSTAND ITS CONTENTS. If the applicant is under eighteen (18) years of age, their parent/guardian must sign this annual waiver and release form and an additional release available from the Club.
220 queries in 1.788 seconds.